Here is a snapshot of the Monitor projects that we have enjoyed and endured over the years!!!!! 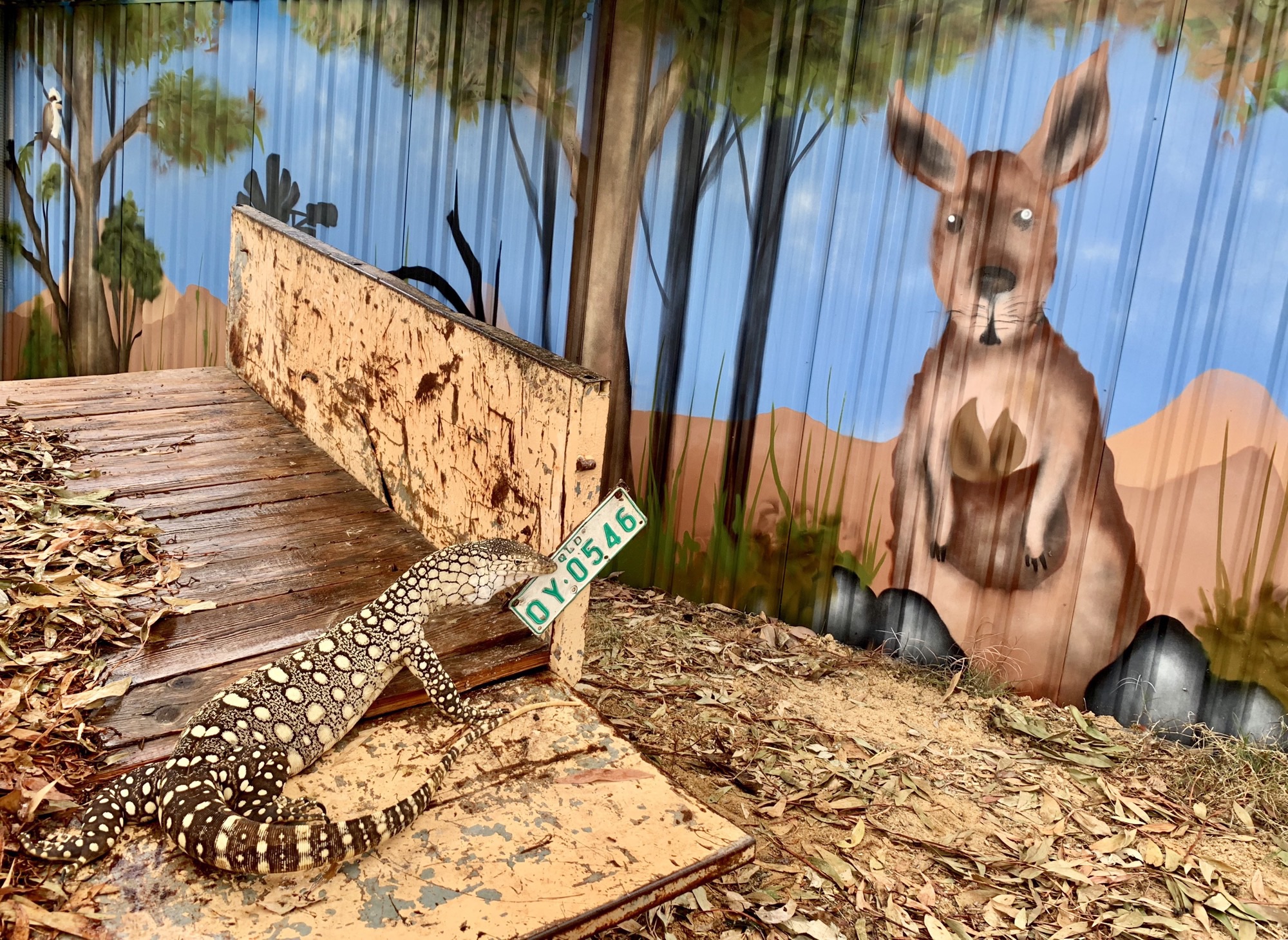 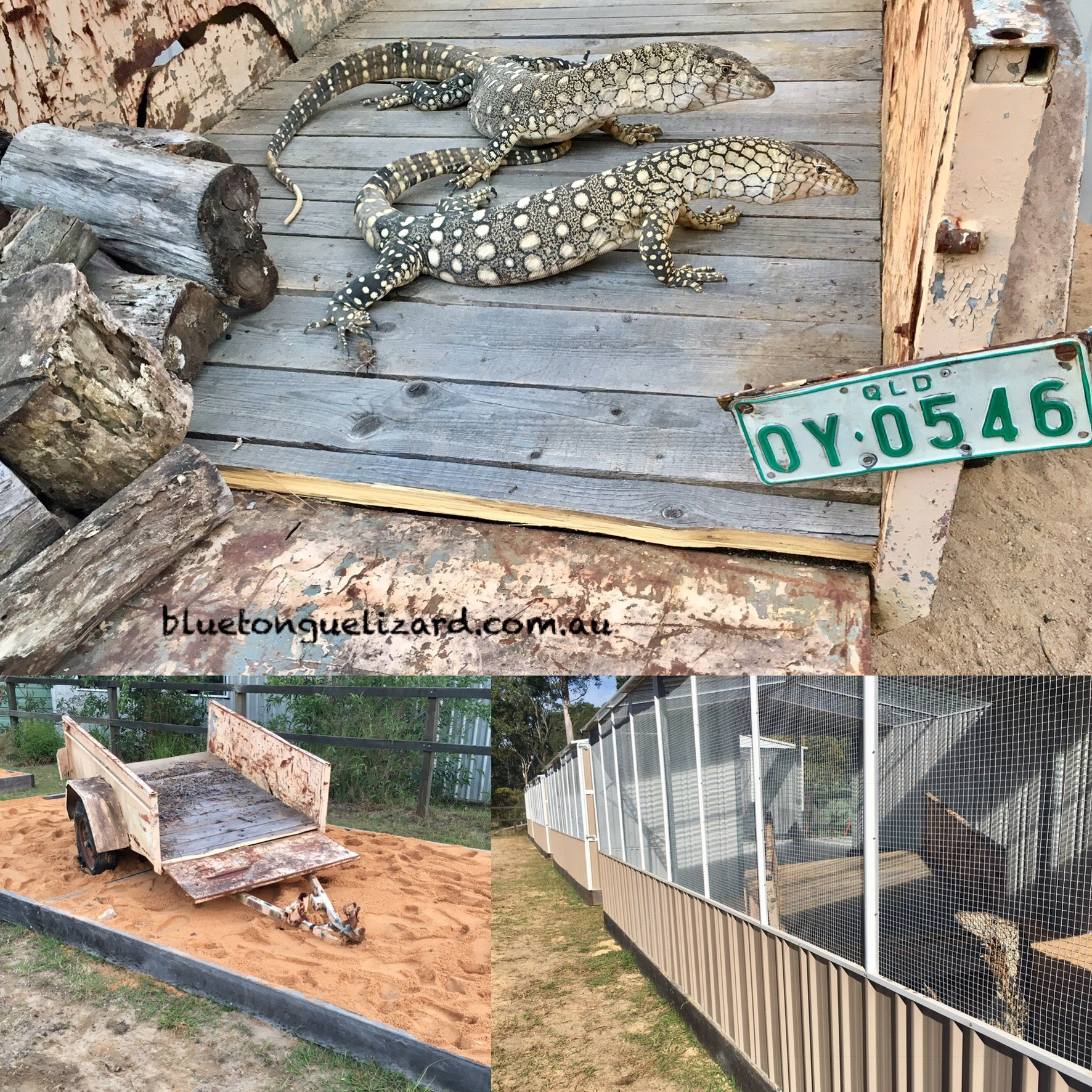 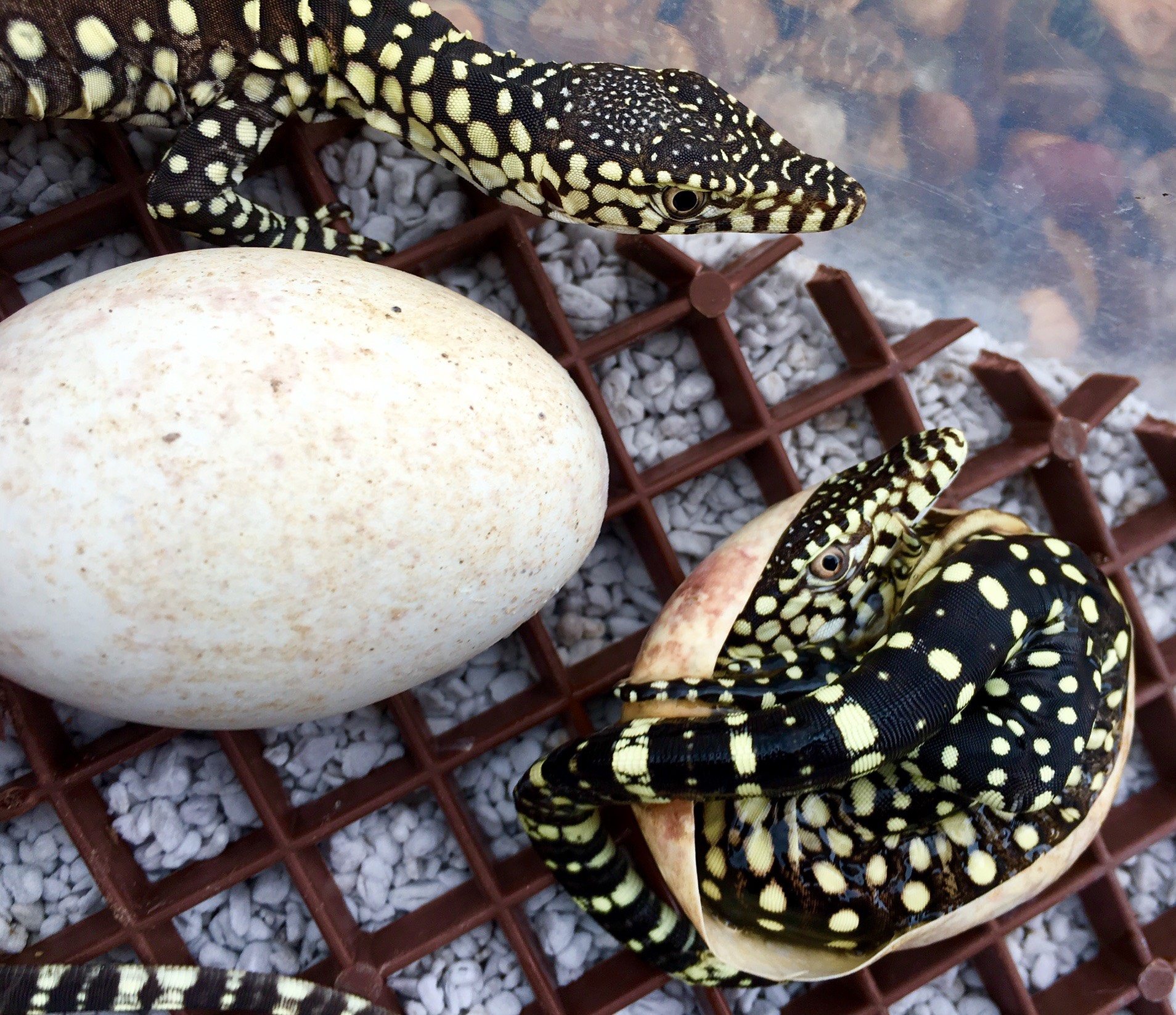 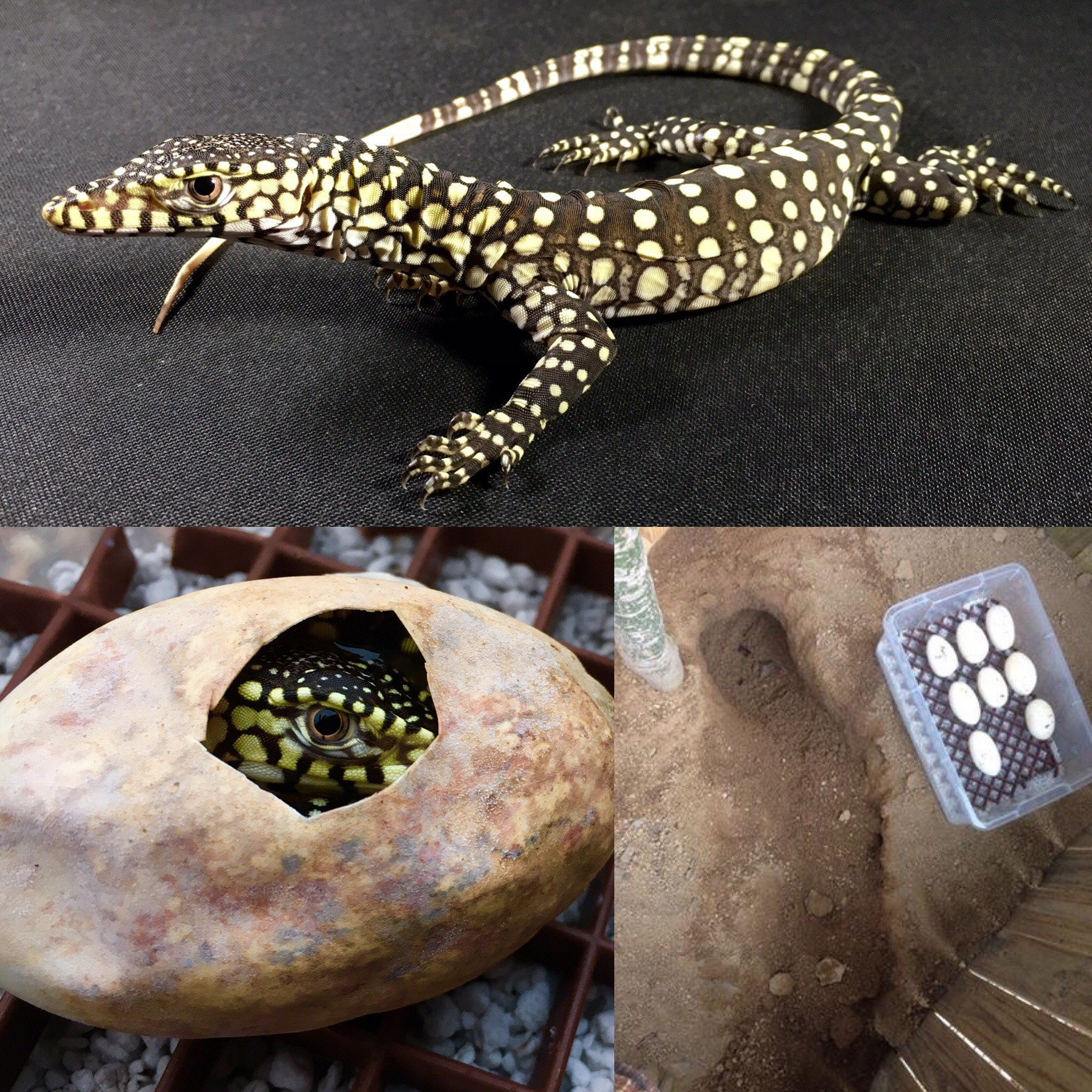 The Perentie is the largest land lizard in Australia and the third or 4th largest Land lizard in the world behind the Komodo Dragon & Asian Water Monitor. I have kept these awesome lizards since 2013 after acquiring an adult female from Justin Machray & an adult male from the ever-green Peter Krauss. I also bought a couple of babies from Childers wildlife park in Childers. The initial aviaries that we kept our adult pair in was 3m x 3m with elevated hides and basking spots with a 300mm substrate across the entire enclosure too allow the maximum area for egg deposition should we be lucky enough !!. In 2014 we were indeed fortunate to get our first clutch of 6 eggs which were harvested from a carefully excavated tunnel that the female had used to lay her eggs and were incubated at 30 degrees celcius which hatched over a 35 day period post 200 days in the incubator. This success has been repeated 3 further times since with a 5th clutch of perentie eggs currently in the incubator produced most excitingly from neonates that are now adults from our first two clutches.

Perentie have provided much enjoyment and satisfaction to me over the last 6 years due to their greater needs in terms of food and enclosure space thus making them purely a hobby interest allowing knowledge sharing between truly dedicated keepers without hobby nonsense. Upgraded aviaries now 6m x 3m are used and our own holdback animals make up our breeders with line breeding for perfect clean patterning and the strongest yellow background an aim for the foreseeable future. Enjoy the photos & don’t forget to check out the popular ‘Perentie Special’ video which is linked above & uploaded onto BlueTongueTV !!! 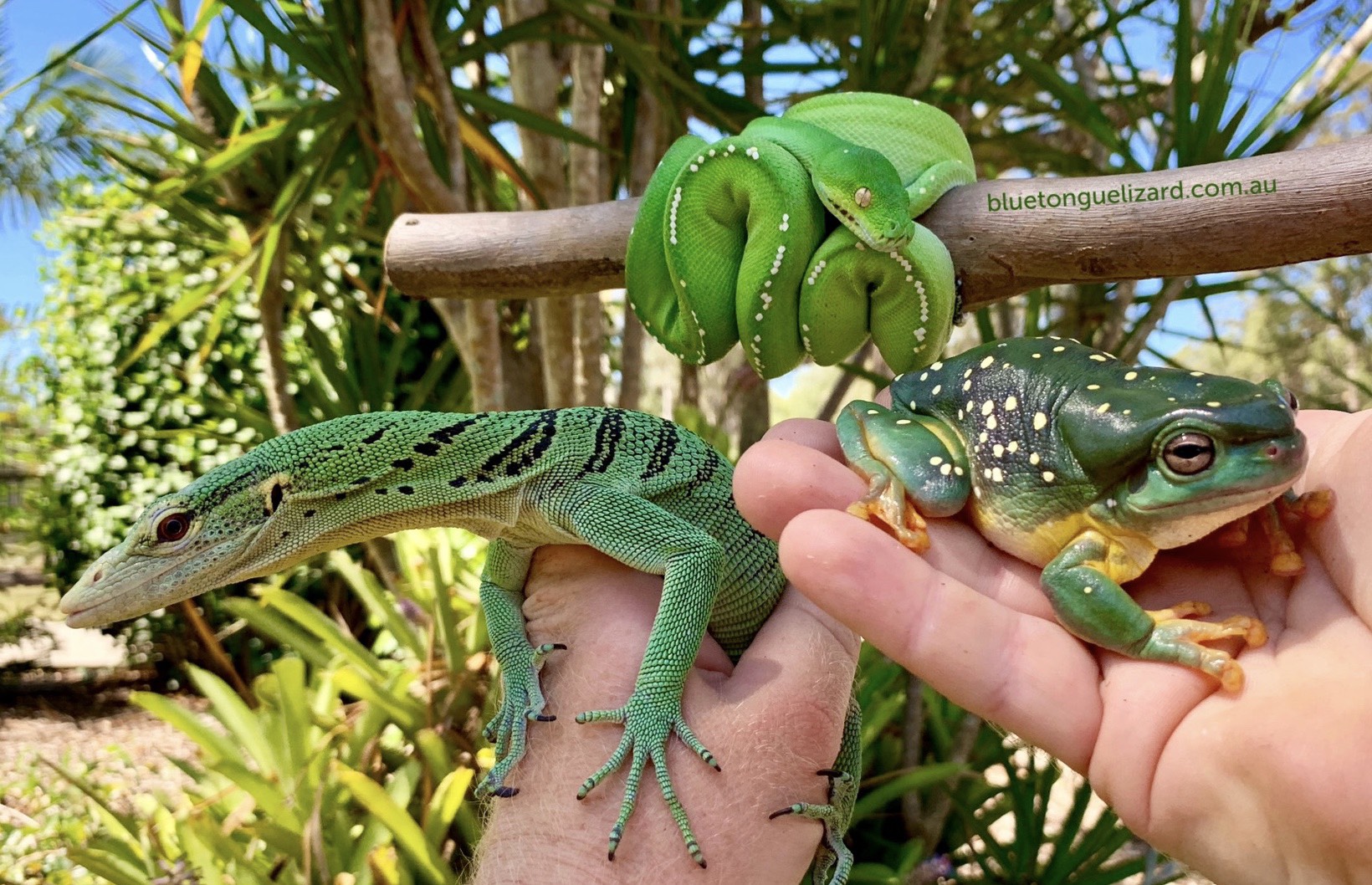 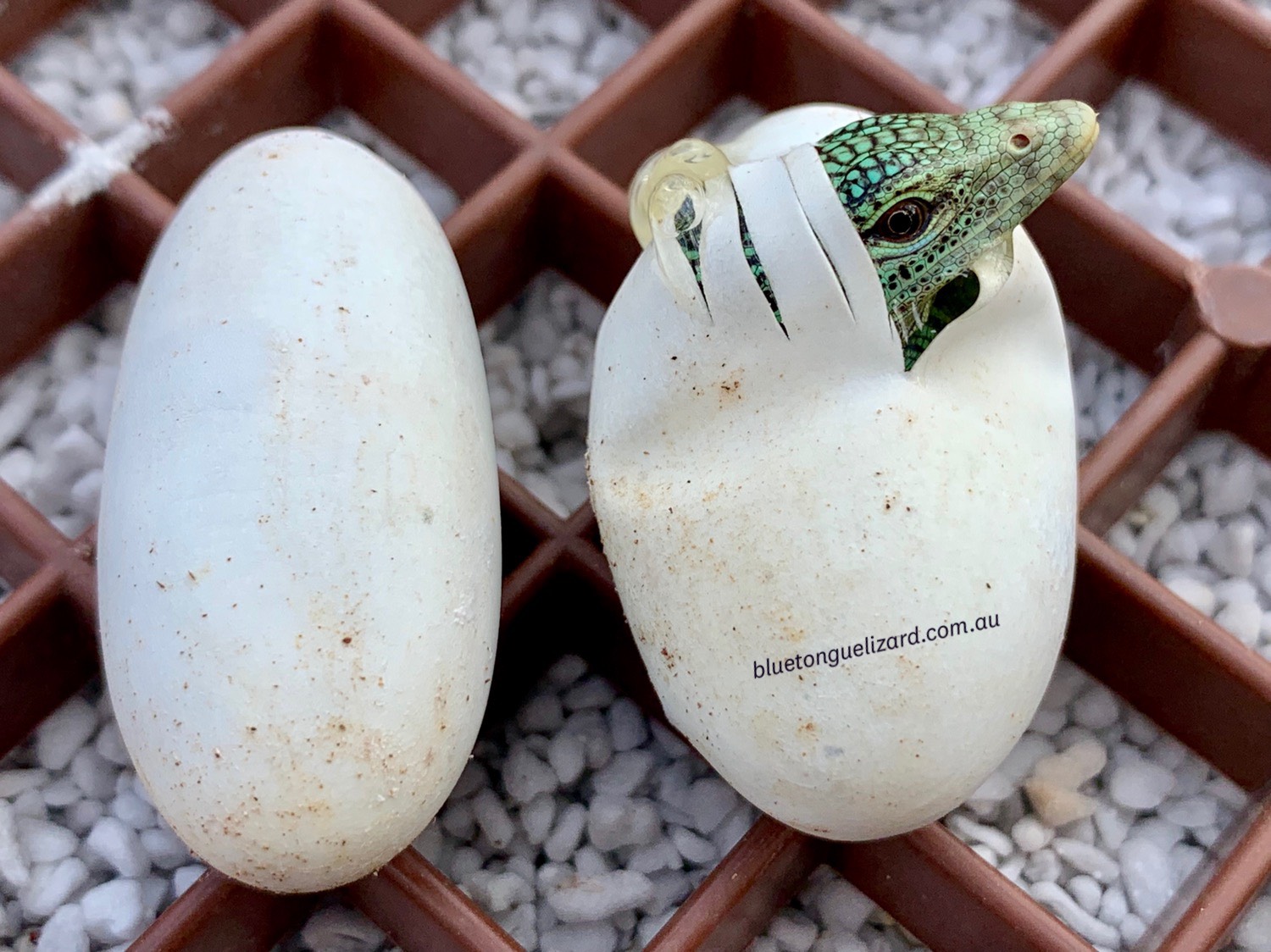 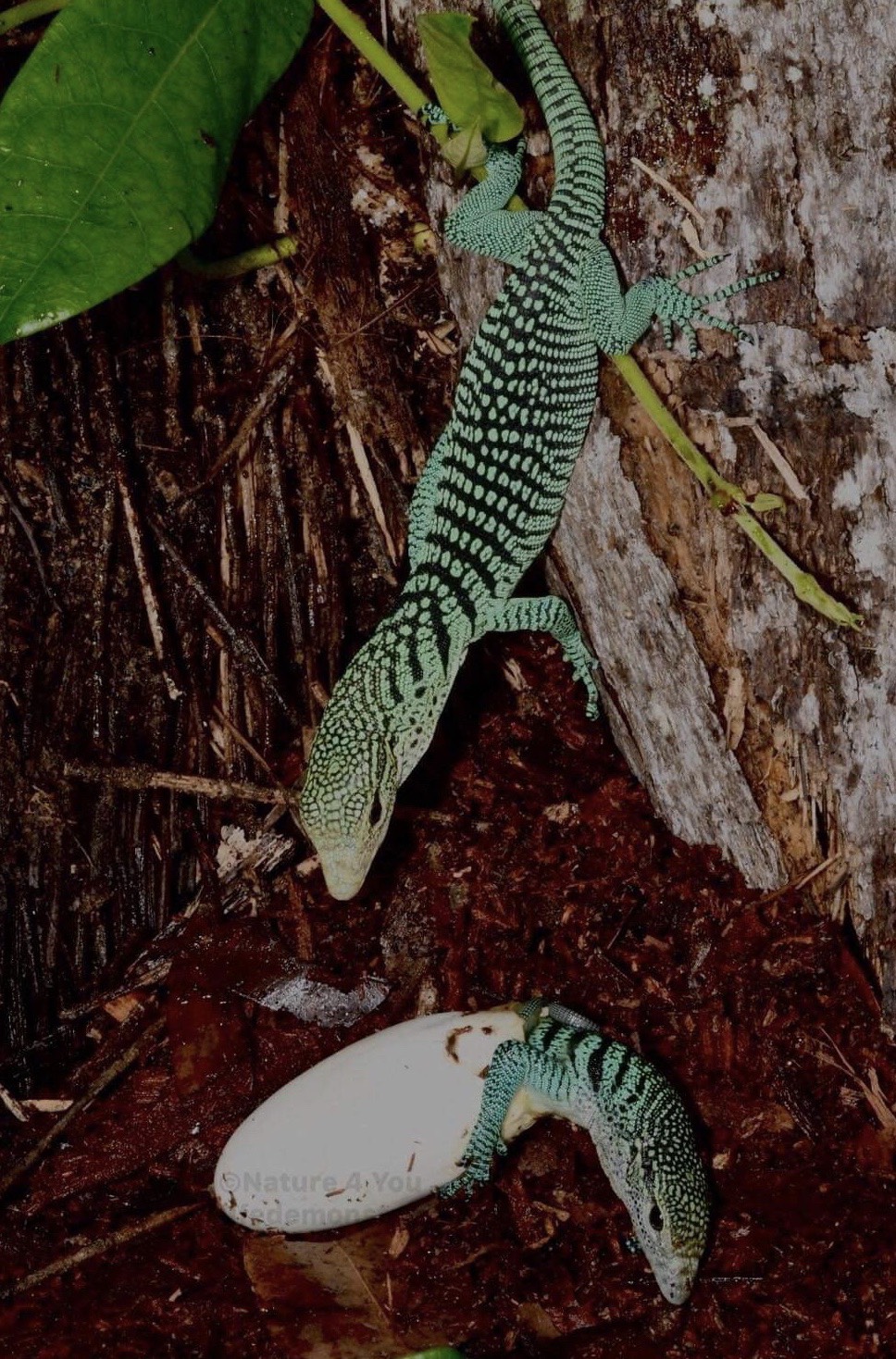 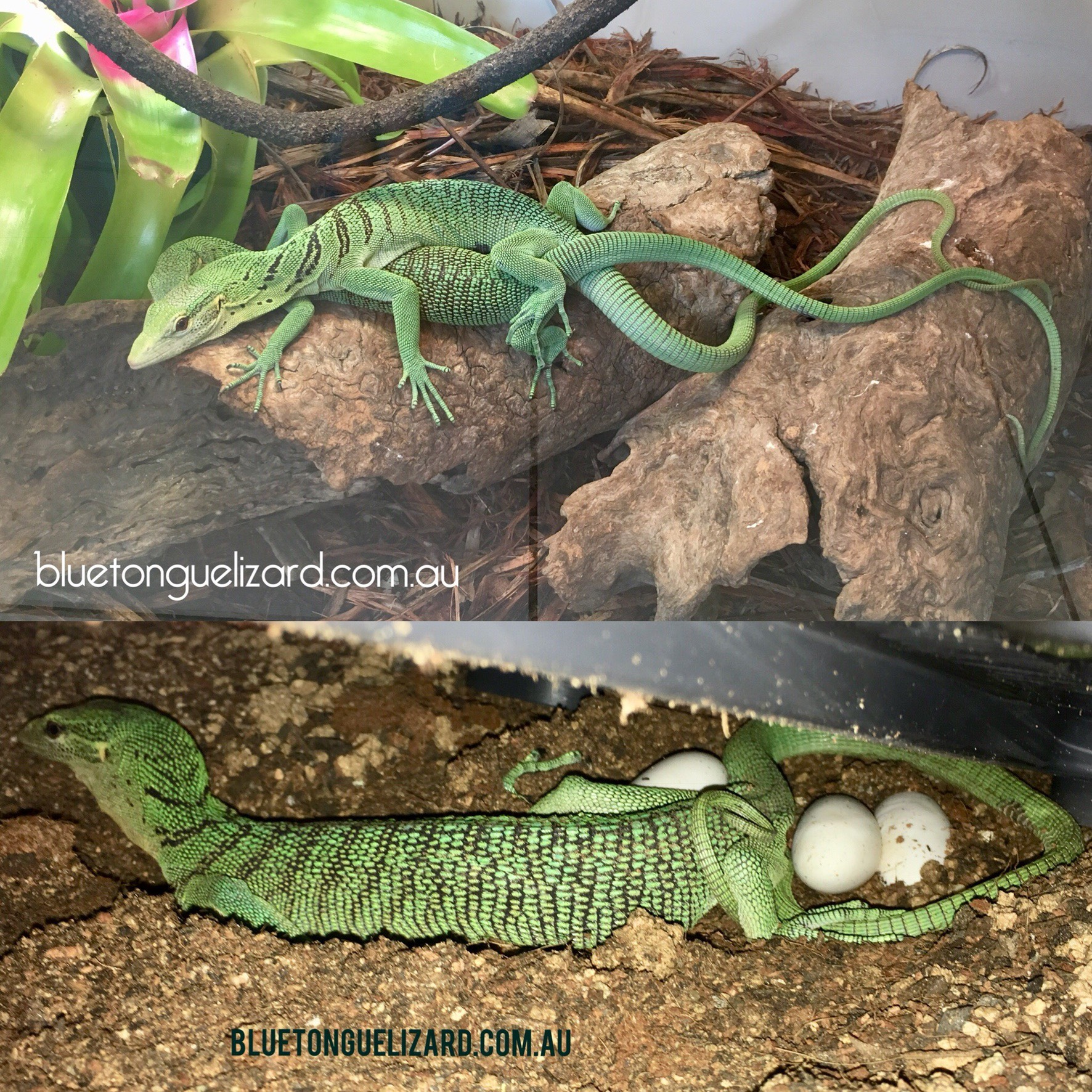 The most desirable lizard in the Australian reptile hobby – PERIOD. These amazing monitors were added to our collection as part of a joint venture with David Evans in 2016. A totally arboreal monitor with a genuine pre-hensile tail which they actively use as a 5th limb as they nimbly use all vertical furniture provided in their spacious 6ft enclosures. These animals are housed individually to allow minimal stress to the female from persistent males as are essentially solitude animals in the wild. Adults seem to mature at around the 150gram plus mark with females laying eggs 30-35 days after mating was observed. Of the 3 eggs that we were lucky enough to get 2 successfully hatched after 150-155 days in the incubator again at 30degrees celcius. Seeing these magnificent animals emerge from their egg was an absolute highlight for us in our reptile breeding projects and has only further enhanced my love for this truly magical species of Monitor.

Emerald Tree Monitors are the easiest of lizards to photograph with their magical green colour as can be seen in the sample of photos on this page !!!! Hopefully if this species successfully breeds in enough numbers in captivity then it can become as common as Green Tree Pythons in the Australian Hobby…… early signs suggest that we are well on the way !!!! 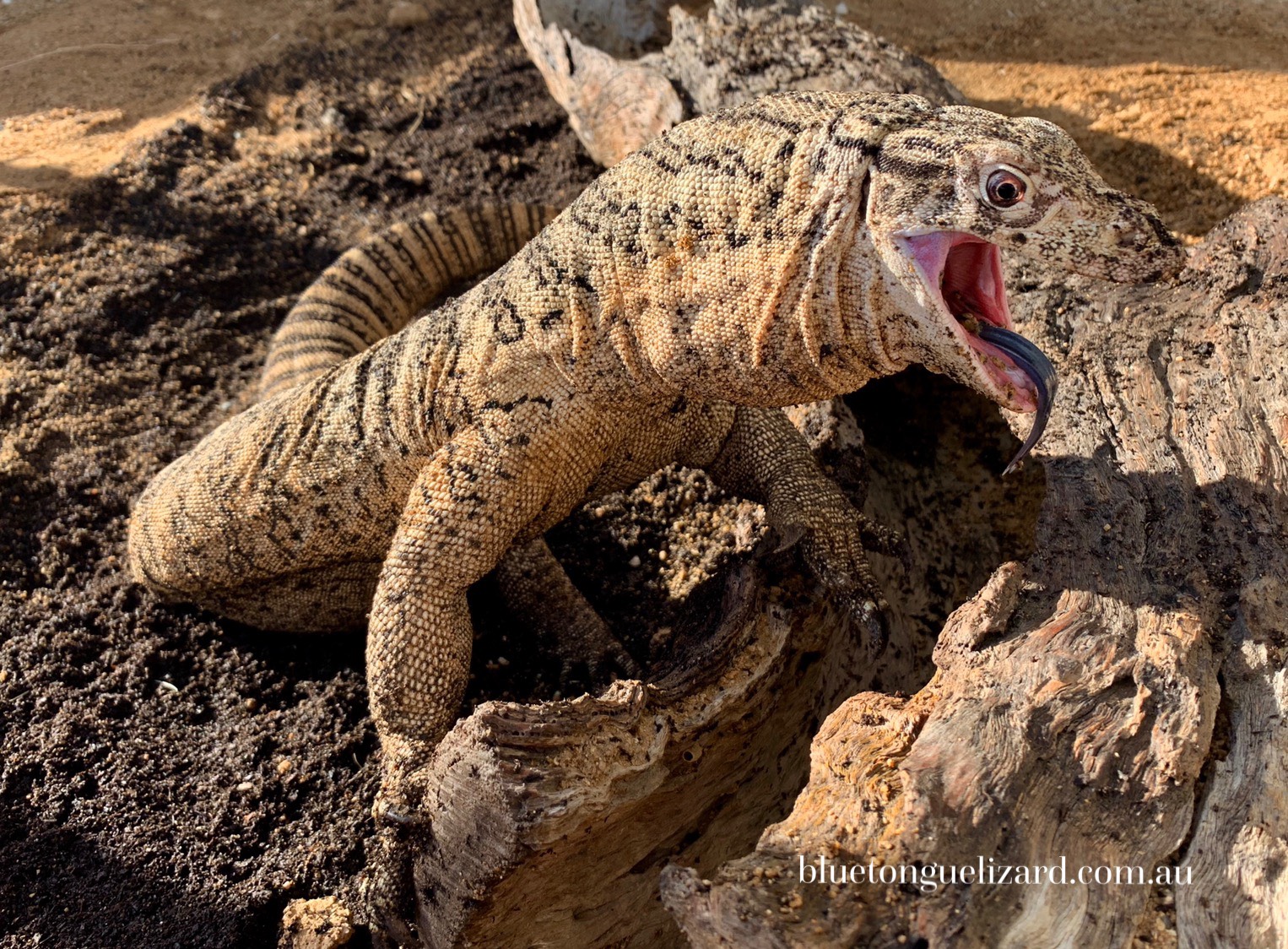 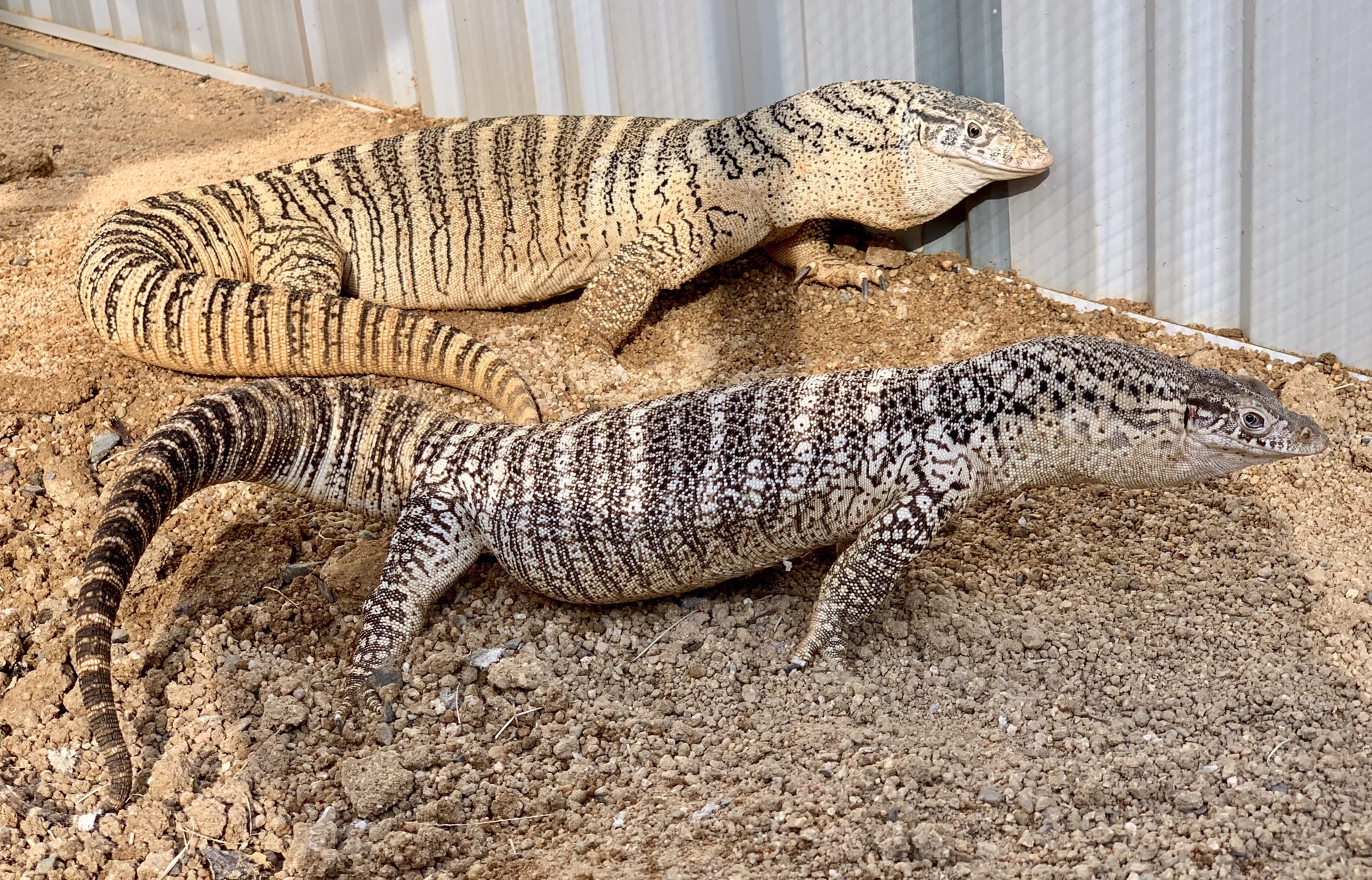 A species which is a particular favourite of mine whilst plain & simply being the most frustrating to keep!! These guys are found in the black soil regions of western QLD & central Australia right up to and into the Northern Territory. They are a pre-programmed burrowing monitor that loves to make tunnels and will relentlessly look for ways to hide under any furniture that is placed in their enclosure. In my opinion it is best to allow these animals the opportunity to burrow by providing a 250mm substrate in their enclosure to allow them to exhibit this behaviour. I have found that they

will more often than not avoid the use of a heated hide unless it is underground instead choosing whatever they can find to ‘get under’. Cold winters therefore will often see them perish if they cannot create a burrow in which to regulate their body temperature in the winter months. If their needs are met and they are not overfed (they are endlessly hungry and will become obese very quickly) they can be a rewarding captive!!! The pair I keep are a North Western QLD locality animal which love playing up for the camera as the photos suggest!!!